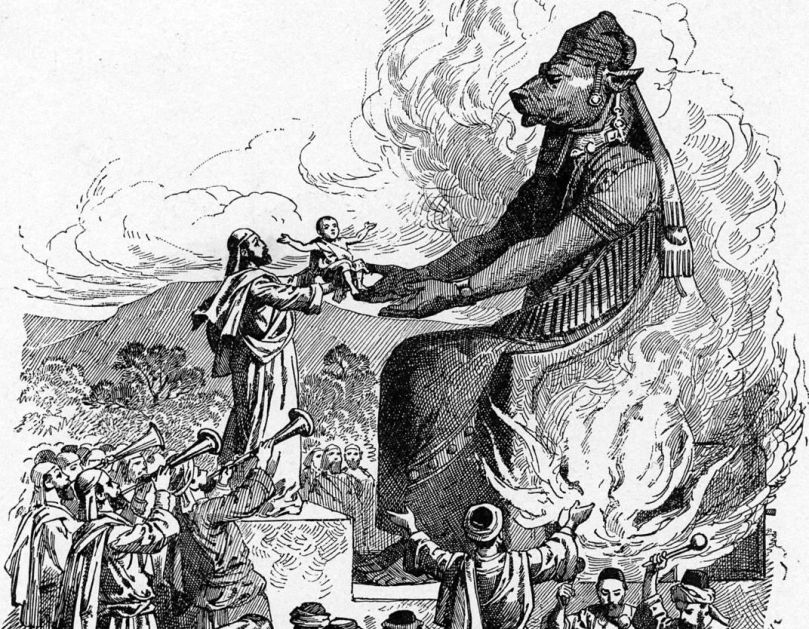 In the midst of commands regarding sexual purity in Leviticus 18, we can find this directive from God to His people:

You shall not give any of your children to offer them to Molech, and so profane the name of your God: I am the Lord.

Moloch is a Hebrew name for a Canaanite god. (It’s also known as Molech, Milcom, or Malcam in various translations.) Later in Israel’s history, Moloch is most often associated with the Ammonites. Solomon actually brings Moloch worship into the borders of Israel at the behest of one of his many wives in I Kings 11:7, and Jeremiah 32:35 specifically condemns some of the children of Israel for continuing to worship this idol or any idol that requires human sacrifice.

What made Moloch unique among the other idols we read about in the Old Testament is that those who worshipped it sacrificed their children, seemingly by burning them before or on the idol. Cleitarchus describes similar sacrifices to Cronus in this way:

There stands in their midst a bronze statue of Kronos, its hands extended over a bronze brazier, the flames of which engulf the child. When the flames fall upon the body, the limbs contract and the open mouth seems almost to be laughing until the contracted body slips quietly into the brazier. Thus it is that the ‘grin’ is known as ‘sardonic laughter,’ since they die laughing. (trans. Paul G. Mosca)

We don’t worship statues any more, but the New Testament writers speak time and again about fleeing idolatry. Paul, in Colossians 3:5, goes so far as to define covetousness as idolatry. In other words, anything for which we are willing to sacrifice our spirituality to obtain, material or otherwise, becomes an idol to us. They are replacing God in our hearts.

Often, from the pulpit, we draw direct comparisons between Moloch and modern abortion, and the comparison is obvious. Both involve children; both involve death. The big differentiator being whether or not the mother involved views their unborn child as a sentient being as most of us Christians do. In the case of the sacrifices to Moloch, there was no doubt that the child was living, sentient, and capable of pain. Yet they would go through with it in hopes that they would receive safety, security, and victory from this god. And that’s where the application opens even further.

Our culture has grown comfortable with sacrificing the lives of “others” in order to preserve security, uphold political ideals, or to obtain some perceived victory. We turn away refugees and their children because welcoming them makes us feel unsafe. We advocate for health care laws that will rip affordable coverage away from those that need it most for some sense of “liberty.” We criticize those who wish to put diplomacy before violence, and praise said violence as strength.

In all of these cases, we’re putting our ideas of security, safety, and victory before the lives of others. We deem our ideals as more important than their existence. But we seldom feel the effects of our own callousness because we’re not the ones affected. Incidentally, sacrifices to Moloch never involved throwing yourself in the fire; it was always someone else, even if that meant your own child.

So challenge yourself with this question: what ideal or victory are you willing to sacrifice the lives of others to obtain? If we’re all honest with ourselves, we might all find forms of Moloch we’re still serving.